I love to sit on the shore, just at the point that the waves reach the sand. My sister and I used to sit there, our arms locked, and let the waves rock us back and forth. Some waves were so small they didn’t even move us…some waves were so strong that we almost slipped over. When the waves are calm, it’s a beautiful place to think. But when the waves are strong…they begin to seem bigger than you can handle. And suddenly I don’t feel like fearlessly facing the waves.

My grandparents lived in Miami for all of my life. We spent a lot of summers there or Disney World. There’s one trip in particular that we spent at the beach in Miami. White sand beaches, pastel-colored hotels, and we were ready for the sun and the sea. Except it rained almost the whole time. And there is nothing crazier than a Florida thunderstorm at the beach. You always knew it was coming before the first drop of rain fell. The winds picked up and the white caps began to fill the waters. The waves quickly went from calm to thrashing, excessive waves that would crash into the shore. There was no way I would have gotten in that water. Those crystal blue waters were dark and murky from the winds. The waters went from a place I loved to a place I feared. 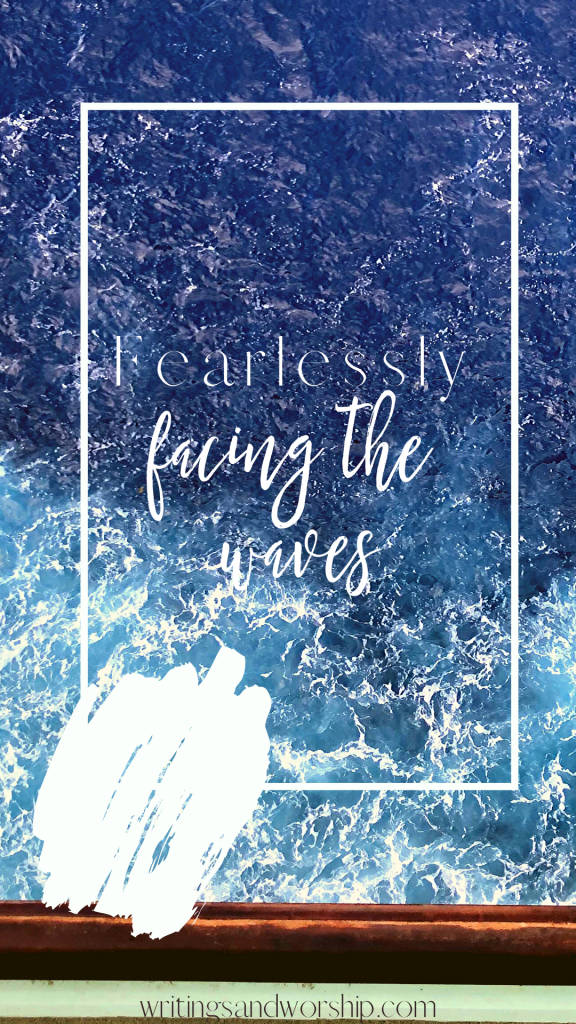 Waves have been on my mind lately. I’ve been thinking of the many times waves and water are written in the Bible and written into our worship songs. Jesus calms the storm, Peter walks on water, Moses parts the Red Sea. The imagery of facing waves are in many of our most popular worship songs and some of my favorites. For example:

And I will call upon Your name
And keep my eyes above the waves
When oceans rise, my soul will rest in Your embrace
For I am Yours and You are mine – Oceans (Where feet may fail)

There are a lot of words you can use to describe me…but fearless doesn’t even come close to making the list. But over and over lately, I’ve been dealing with this issue of facing waves. I know, personally, I always tend to panic when I face the waves life brings me. I’ve been a Christian since I was 6 years old and grown-up knowing He is in control…but sometimes my human mind finds it hard to face trying times and hard valleys with full trust and faith. But that’s the point of our faith, right? To trust when we don’t really understand. And to have faith in what we can’t see. To step out into the water even if the waves might seem rough.

Sometimes I feel like Thomas, especially when I am facing waves. I want to face them fearlessly but my human instincts have a hard time trusting. I want to be able to face those waves with confidence alone in the God that can walk with me through anything. And to want to be able to step out into the water and not worry about the waves being too much to handle. Personally, I want to be able to step out of that boat like Peter but unlike Peter, I want to only focus on Jesus and the fact that He is in control. Sometimes though I feel like Peter who began to sink when He took His eyes off Jesus. My goal is to stand fearlessly facing the waves and know that God is good and won’t let me fall into rough waters alone.

With all this going on in the world, I’ve been feeling so many emotions. What does God have planned? Why are we all going through this? All the questions we’ve all dealt with and it all boils down to this: I want to stand firm fearlessly facing the waves. No matter what life throws at me, no matter what Satan tries to make me question, I want to stand firm in my faith. There are a lot of waves in this world. And I want to be able to walk straight into them and have no fear of what is to come.

My @thedailygraceco haul is up on W&W! Bible studi