One call. One look. One memory. One flashback. It only takes one to fill me with fear lately. Sudden death can bring on some intense fear.

The problem with a sudden death is that it’s just that…sudden. You’re not prepared. You’re not expecting it. Death comes and interrupts your normal life like a wrecking ball. When you suffer a sudden loss, you’re typically broken- typically overcome with fear of the what if’s.

I was an anxious person before January 8th but I’ve become an even more fearful person since losing my dad suddenly. Learning how to handle your anxiety disorder is something that everyone must do, but lately, it’s been very hard for me. And in many ways, I feel like I’ve started over in my journey with Generalized Anxiety Disorder.

This post is going to be raw, real, and hard for me to discuss. Especially as a Christian, it’s hard to open up about fear because there is a big portion of the church that will shake their finger at me and simply say “you don’t trust enough.” But today, I pray that this scattered rambling of a post touches someone who has experienced a sudden loss and is dealing with fear. 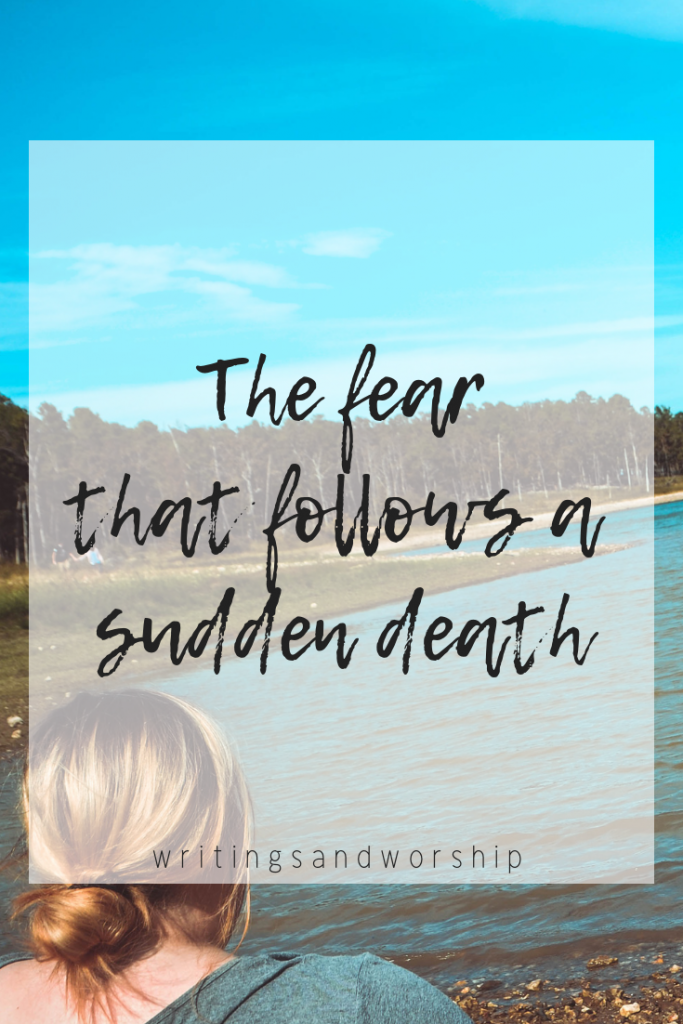 The fear that has followed my dad’s sudden death is unlike any other. It’s different from a typical fear that I face daily. Very few people know how close this fear has come to crippling me in the last 9+ months. For example, this is a few things I’m dealing with:

The reason I share these is that I want to emphasize the Irrationality of these fears. They don’t make sense. They aren’t real. And they aren’t even likely. But controlling fear after a sudden loss is not an easy task- at least for me.

While the fear that follows a sudden death is typically irrational, it is completely understandable. Of course, I would be nervous to answer the phone after that one phone call broke my life into pieces. So let yourself have a little bit of a break while grieving and dealing with the fear that will follow a sudden death.

The “want” to just crawl into bed and let this fear rule my life if very real and strong. It would be easy to just stay at home, where I feel safe, and let life pass me by. Trust me, I have done that exact thing many times since January. But if you are dealing with fear after a sudden death, keep fighting against that fear. It might seem draining and exhausting…but you’ve got to keep fighting it. Even if that means going to counseling or purposely doing things to work on overcoming that fear. God doesn’t give us a spirit of fear- fear is from Satan and never of God. God doesn’t want you to live in constant fear and let me just say, He understand how scary it is to lose someone suddenly. But we have to trust Him and keep seeking Him to conquer that fear. I can’t conquer fear alone but with God, I can.

God doesn't give us a spirit of fear- fear is from Satan and never of God. Click To Tweet

Whether it’s a counselor, a family member, or just a friend. If you are dealing with crippling fear after a sudden loss, talk about it with someone. I recently sat and talked about some of these fears of mine with my mom and it has helped me tremendously. She didn’t judge, didn’t say I don’t have faith…she just listened. Fears always seem 10x’s bigger in your head. Typically with anxiety, if I can get my thoughts out to someone, it subsides a little because I get it off the forefront of my mind. Bring these fears to God and someone you trust- hopefully, it will help you.

Whether people admit it or not, I think numerous people probably struggle with fear after losing someone so suddenly. It’s the phone call you never want to receive. I can guarantee you are not alone in your fear. You’re not less because of your fear. Losing someone suddenly takes a toll on you. Obviously, all death takes a toll, but there seems to be something even more anxiety-inducing about a sudden loss. Because it can happen again at any moment.

I wish I had more helpful tips for facing fear after a sudden death. But it’s honestly something I’m still working through. But I do know that I can’t let fear cripple me and I pray that you don’t let it cripple you either. Sudden death is awful and gut-wrenching but its something you have to work to get through- just give yourself some time.

I’d love to talk with you if you are also facing this fear because, as I said, you aren’t alone.